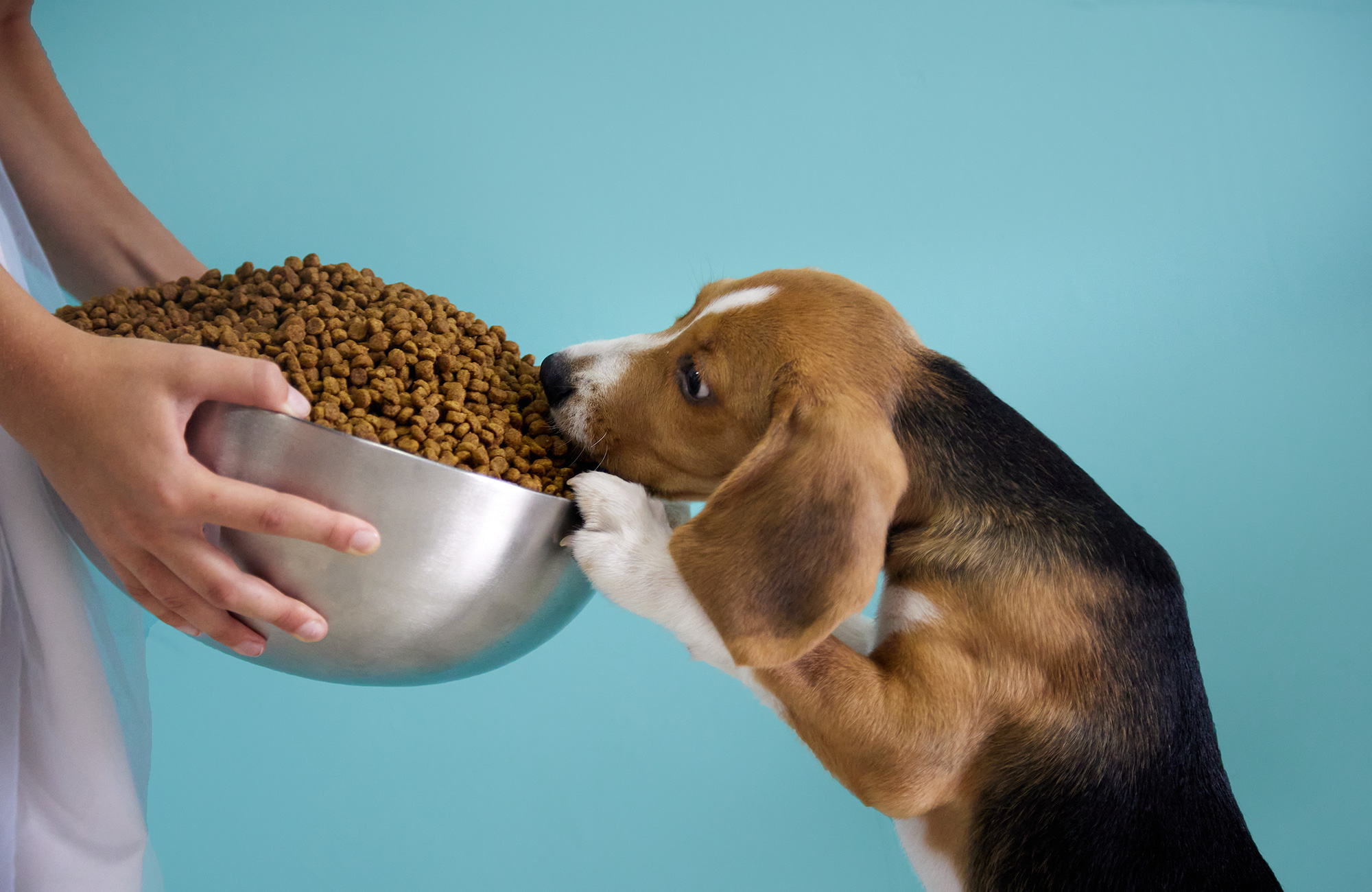 We give a dog food, but the dog seems to be distracted.

Why Does My Dog Jump Around His Bone?

We have all seen this behavior at one time. We give a dog food, but the dog seems to be distracted. There is a lot of frantic behavior around the food, and the dog doesn’t eat the food immediately. Sometimes, the behavior worsens, and the dog becomes more preoccupied with playing and jumping around the food instead of just eating it. What’s happening, exactly? 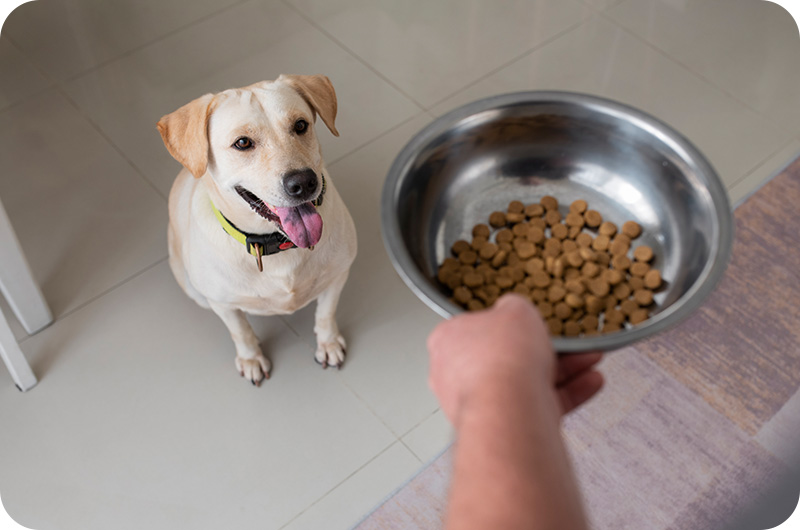 What does behavior mean? This behavior is commonly seen in puppies, adult dogs, and senior dogs. It seems like the entire dog world is not immune to this ‘strange behavior.’ Many pet owners think that it’s not a harmful behavior and that it is actually ‘cute.’ So, what’s the real deal behind jumping around chew toys, bones, food, and treats?

The simple explanation is resource guarding. Let’s remember that dogs are descended from wolves, and they still have many wolf-like traits. One of these traits is the tendency of a meat-eating predator to protect its food and other resources.

The jumping around that you see is related to the teeth’ baring and growling when someone comes near the food bowl. Yes, despite the difference in the behavior, they come from the same tendency. The goal is to fend off attackers and other people/dogs that might be interested in taking away the resource in the first place.

Yes, it is strange, considering that the human owner is the one that gave the resource in the first place. However, we have to remember that these are dogs, and they don’t think like humans. They don’t understand that there would always be extra food hanging around the house and that they don’t have to show any aggression.

Since we can’t explain things directly to dogs, we have to recondition and train them the way we want them to behave. Now, the usual tendency of people is they want to punish the dog for showing negative behavior. This rarely helps, so we recommend that you try only dog training techniques that use positive reinforcement in all situations. 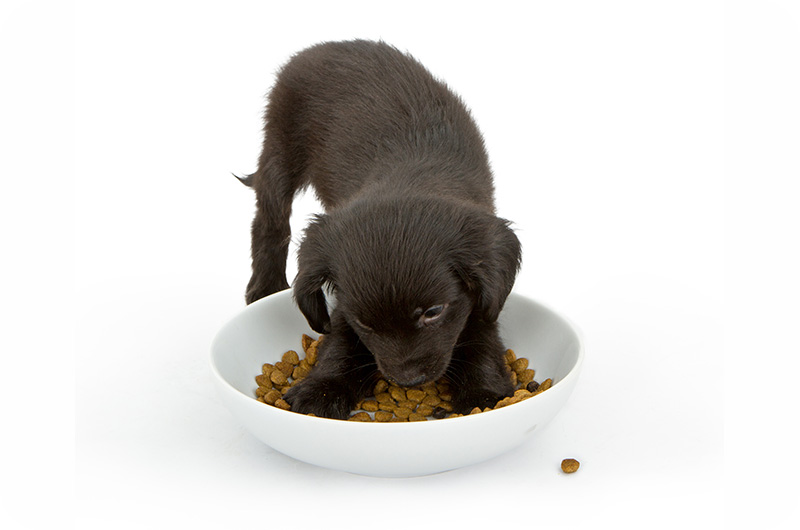 Is This Good or Bad Behavior?

However, jumping around and playing with the treats (seemingly) has another dimension to it, which you should know as a pet owner. When a dog is constantly jumping around and causing chaos during mealtime, it shows signs of dominance and aggression.

Yes, the jumping around doesn’t compare to baring teeth, but they come from the same central instinct: to overpower you, so you would ‘give up’ the food and ‘not take it’ from your dog. Again, this is irrational behavior from the point of view of the human, but it is instinctually justified through and through to the dog.

Should The Owner Stop the Reaction?

Dog experts believe that pet owners should discourage the behavior and train their dogs whenever possible so they will no longer have to show signs of resource aggression or resource guarding. This is a sound decision, especially if you have multiple pets at home, like more dogs and cats.

We are sure that you have seen a dog react to a cat who wants to sniff anything. Bear in mind that resource guarding (mild behavior) can instantly transform into much worse resource aggression, which can trigger fights and injury between pets.

We are certain that you don’t want this to happen, so you must opt for reconditioning your dog instead of having to face the consequences later on. 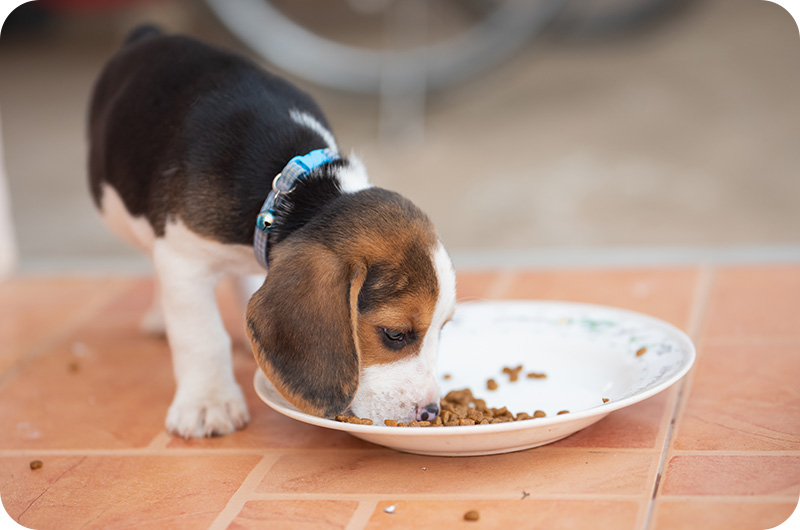 Why Do Dogs Play with Their Treats?

Why does my dog throw his treats around? Resource guarding can also be exhibit in negative behavior, such as your dog playing with food and not eating. The “playing” part is the assertion of dominance that your dog can do whatever it wants with the food, and it can eat the food regardless of the time it was given.

This kind of behavior is best nipped in the bud when the dog is still young. Surely, very young puppies don’t have the same cognitive levels as older dogs, but they can be trained easily not to exhibit any aggression, no matter how far it goes against their instinctual drives.

Here’s a scenario: you are coming into the kitchen with several food bowls for the puppies. If they are all being wild about it, delay putting down the bowls of food. Allow the puppies to do what they want, but don’t give them the food yet. Please wait for the puppies to settle down until they become disconnected with the idea that they need to jump up and down for the food. They form these associations early in life, so it’s best to remedy the behavior early.

When the energy has died down in the kitchen, reward the puppies by putting down the bowl. This type of reverse psychology or training also works well with adult dogs. There are times when adult dogs would become so rowdy that they would spill all the food onto the floor.

If you are tired of cleaning up just because they are resource guarding, perhaps you can start training them. The key is to introduce new elements during feeding time so you can control the behavior. For example, you can put down the bowl slowly when your dog least expects it.

If you are having trouble changing the behavior in the first place, perhaps it is time to create a new schedule for feeding so you can start anew. Just take things slowly and focus on rewarding only the behavior that you like. The rest will fall into place later on.

Why does my cat purr so loud?

Why Do Cats Fight?